The Gang is Getting Back Together 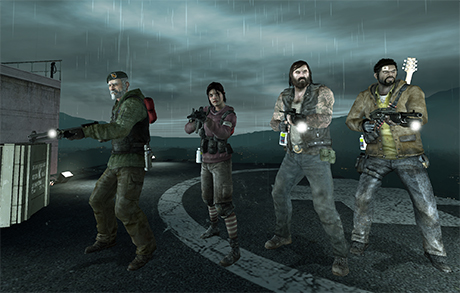 Building on the work from our last update, we are now releasing the entire set of “older” Left 4 Dead 1 models.

It was an interesting walk back through our content tree to find all the various pieces and versions. Depending on your definition of the old models, some of these may vary in some slight detail as we work in an iterative process and never internally defined a version of these models. They have always just been Zoey, Louis, Bill, and Francis to us.

While we were in the history books we found some other interesting bits.

There are these versions of Zoey with different colors (Blue – Yellow). A really, really early character concept sheet from September 2005, and the internal release notes for the January 25, 2006 update. The highlights of the notes include:

* NEW: The Hospital Urban map has been split into four separate maps, with HL2-style map transitions. When all living Survivors enter a checkpoint and the door is closed, the next map in the sequence will load. All items, players, and infected will retain their state across map transitions. Checkpoint doors are impervious to damage until all of the Survivors leave the Checkpoint once (with a few exceptions). The "exit" door of a Checkpoint cannot be opened until after the map transition.

* NEW: When a Survivor's health reaches zero, he no longer immediately dies but instead falls to the ground "incapacitated". While incapacitated, the victim cannot move, slowly "bleeds out", and can take additional damage from the Infected, friendly fire, explosions, etc. If a friend can reach the incapacitated Survivor before he bleeds to death, the rescuer can +use him to "help him to his feet", leaving the injured player with a small amount of virtual (blue) health. A First Aid Kit can also be used to revive an incapaciated player, healing him in the process. Incapacitated players can press their attack button to call for help, and can wave their flashlight around to help others find them. Note that traumatic damage (explosions, steep falls) still kill Survivors outright.

- Baseball Bat has been removed

It took us some iteration, but we got that baseball bat back in 3 years later.